The figure below shows the structure of Cweb protocols, from the low level crypto, file, and object store access, to higher level protocols. 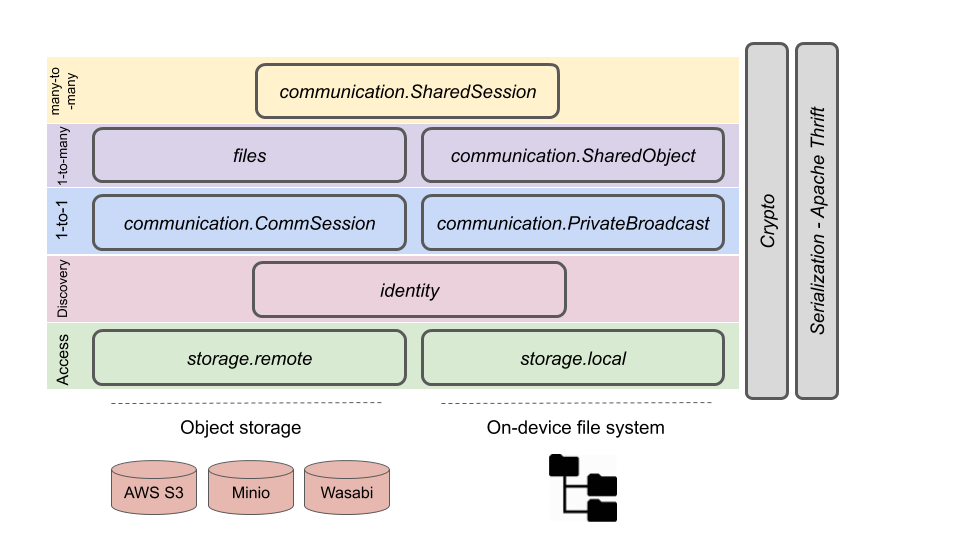 Two sets of utilities are used across the stack:

The Discovery layer contains primitives for publishing and fetching Identity Descriptors (see Identity and Storage). To communicate with A, one has to know both the Cweb Id of A and the public storage profile of A. At the moment Cweb does not include discovery service, thus Cweb Ids and storage profiles are exchanged via external channels. It is up to the the user to ensure authenticity of the storage profile. In the future, one can imagine a discovery service being part of this layer.

The 1-to-1 layer contains protocols for direct communication between two peers.

The Private Broadcast is a bootstrap protocol that serves two main purposes:

It requires communicating peers to know each other Cweb Ids and storage profiles. For peer A to send a private broadcast message to B, A encrypts its message with B’s public key, and publishes the encrypted file in its cloud storage. The filename is derived from B’s id using a public hash function f. To read the message, B hashes its own id into a filename using f, and attempts to read and decrypt the file with that name from A’s storage. Since f is lossy, the file could have been addressed to a different peer in which case the decryption will fail. Varying hash length of f allows trading-off efficiency (collision probability) and deniability of communicating with B.

The Communication Session is a more efficient protocol for 1-to-1 communication. The protocol is a combination of X3DH key agreement for session initiation, and Double Ratchet for message exchange. The protocol relies on peers broadcasting their X3DH prekeys as part of identity descriptors. A session is initiated by one of the parties (A) sending a session initiation messages to the other party (B) via private broadcast. Once B receives the initial message, a Double Ratchet session is established. The protocol polls messages thereafter. To poll for a message, B constructs the expected message id of the next message from A and attempts to read the corresponding file from A’s storage. When read and decryption succeed, the message is delivered. Message id derivation is an extension of the Double Ratchet protocol and is modeled after the derivation of header keys.

The 1-to-many layer contains protocols for privately sharing data from one to multiple peers.

File Sharing allows uploading and sharing files with selected peers. The protocol chunks file data and supports interrupting and resuming upload/download to allow working with large files over slow and unreliable connections. Every chunk is encrypted with its own key, as is the File Content Descriptor - the file metadata and the list of chunks and their keys. Once uploaded, the file can be shared with peers by sending a File Reference - a small data structure that contains the file metadata, a pointer to its content descriptor, and the decryption key.

Identity Profile complements the property list in the public Identity Descriptor by implementing a private list of properties that are shared with selected peers only. Identity profile protocol is a thin wrapper around the shared object protocol. In StoneAge messenger identity profile is used for sharing profile picture only with peers the user is communicating with, and to avoid having the picture being available publicly as part of the identity descriptor.